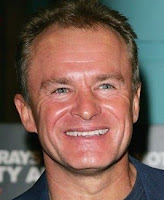 Bobby Davro got "bored" of EastEnders.

The comedian says he would have stayed longer in the BBC soap which he departed in December 2008, just over a year after making his first appearance but was unhappy with how his character, Vinnie Monks, was portrayed.

He said: "I wish it could have been longer. But the writers didn't develop him as much as I wanted and I got bored."

Although the 50-year-old star has left 'EastEnders', he is keeping busy appearing in pantomime 'Cinderella' in Milton Keynes and training for ITV celebrity skating contest 'Dancing On Ice'.

Bobby has reportedly been taking lessons on the ice since July as he is determined to win over viewers and do well in the competition.

A source said recently: "Bobby is a well-known figure from his comedy days and built up a whole new fanbase on 'EastEnders'. It will be great to see how he fares on the ice."