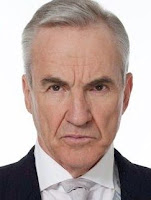 EastEnders fans are driving themselves to distraction trying to work out who killed Archie Mitchell.

The evil soap baddie, played by Larry Lamb, was bludgeoned to death with the Queen Vic bust on Christmas Day while 10.9 million viewers watched.

Soap forums have been bombarded with fans speculating on who they think committed the gruesome crime.

The murderer won't be revealed until Friday February 19, in a special episode to be broadcast live to celebrate the BBC1 soap's 25th anniversary.

Archie had plenty of enemies with reason enough to want him dead.

He had turned his own family, Peggy, Phil, Roxy and Ronnie Mitchell, against him with his cruel and heartless behaviour, as well as incurring the wrath of Jack Branning for pushing pregnant Ronnie.

Janine Butcher has a motive as Archie had callously dumped her on Christmas Day after using her to hatch his evil plans and Ian Beale had a reason to want him out of the way due to his threat of blackmail.

Now Bradley Branning and Stacey Slater could be suspects after viewers learned Archie attacked Stacey and now she is pregnant.

One fan called musicman099 on the digitalspy.co.uk soap forum declared: "This is going to drive me mad till February!"

Anonymous said…
Why has it become necessary to have Moslem involvement in Eastenders? the way the programme is heading why not just call it immigrant enders and be done with it.
Friday, 01 January, 2010

Anonymous said…
The BBC let your leader on question time so why not have a gay and moslems story.
Saturday, 02 January, 2010