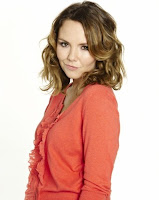 Janine Butcher gets "murderous" when Archie Mitchell turns on her in 'EastEnders' this Christmas.
The tables turn on Janine who has been planning with the villainous Archie to take over the Queen Vic pub from the rest of his family - when he kicks her out on Christmas Day.
Charlie Brooks, who plays Janine, said: "He'd played her for a fool and that's one thing she can't stand. She likes to get even when somebody crosses her."
Once she is kicked out by Archie, Janine heads to Pat's house, where she tells Ryan that she plans to get her revenge on the 62-year-old, who it has been revealed will be killed off on Christmas Day (25.12.09).
She added: "She certainly wants him dead at the time. But did she get even or did somebody do the dirty work for her?"
However, Charlie also admits that her character never really loves Archie: "She was really attracted to his money and power. She's seduced old men for money before."
Archie's killer will be revealed in 'EastEnders' 25th anniversary episode in February.
Source - Virgin Media
Email Post
Labels: Archie Janine