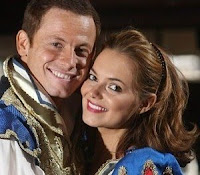 The former EastEnders star, who left the soap in August, stars with her boyfriend and fellow ex-EastEnder Joe Swash, in Snow White at Bristol's Hippodrome theatre and insists she isn't at all embarrassed about swapping TV acting for a stint in panto.

Kara told The Sun: "It's really the only time we Brits get to be a bit silly and not take anything too seriously - I don't care if it's cheesy - I love cheesy!"

The 26-year-old actress played Dawn Swann in the BBC soap for four years, before she and boyfriend Garry Hobbs played by Ricky Groves left for a new life together on a barge in the summer.

Kara has been dating Joe who played her on-screen brother Mickey Miller in EastEnders for around a year.