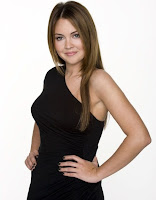 Lacey Turner burst into tears after she was described as "fat".

The EastEnders actress revealed she started crying after photographs of her wearing a bikini while on holiday in Dubai were printed in newspapers, with descriptions calling her overweight.

She said: "The only thing in the press that hurt me was being called fat. I'm not toned because I don't go to the gym, but I'm not fat. I cried when I saw the article.

"I can see how easy it is to get obsessed with weight, but I won't go down that road. I'm happy with myself. I've just got to stop worrying about what everyone else thinks of me."

The 21-year-old beauty also admitted she is "proud" she had a breast enlargement operation when she was younger.

She explained: "I didn't do it to look sexy. I felt odd and out of proportion. My body looked wrong. In my family, all the women have tiny chests. I know I was just 18, but I knew my shape wouldn't change because it's in my genes.

"I don't regret it. I think my body looks the way it should now. I'm proud I had the operation."

The brunette actress has also revealed she is quite "mild" and often wishes she would be as outgoing as her on-screen persona, Stacey Slater.

She added: "If Stacey got dressed up like this she'd be off to the nearest nightclub. I sometimes wish I was as ballsy as her, but I'm about as far from Stacey as you can get. My idea of hell is a celebrity party. I'd rather stay in and watch TV. I'm more mild than wild."

Anonymous said…
She is fat and a shite actress. Panto awaits then she will return to EE when there's no other work out there.
Sunday, 31 October, 2010