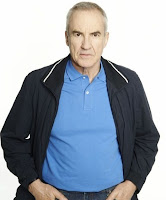 The Walford villain gets his comeuppance when he is bumped off in the Queen Vic on Christmas Day, which sparks a murder mystery storyline.

He continued: "Luckily, people say I'm nothing like the character in real life, which is a good thing. It shows that I'm a capable actor!"

Archie has developed several enemies in Albert Square, so the suspects in the murder will be numerous and will include Peggy Mitchell, Phil Mitchell, Janine Butcher, Ronnie Mitchell and Roxy Mitchell.

Before his murder, Archie will succeed in his plot to take over the pub, and end up pushing pregnant Ronnie against the bar in the pub, which results in her going to hospital.

Larry said: "Archie can't believe the damage he's caused. Nothing goes as planned and he finds himself alone. No one wants to know him, he has caused devastation everywhere and everyone has a grudge against him."