Larry: No one knows whodunnit 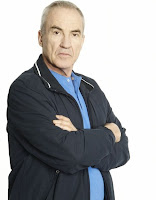 Archie Mitchell's on his way out, and EastEnders fan will be dying to know who's responsible for his death.

One person who's very much in the dark is actor Larry Lamb himself, who has no idea who the killer is.

In fact, Larry thinks the killer has no idea yet either! And as Archie's been making enemies left, right and centre, the suspects will be numerous.

Larry told the Mirror: "I definitely don't know who murders Archie and neither do I want to.

"Actually, I don't know if anybody knows whodunnit yet. It's not going to be revealed until they do the performance on February 19 and knowing the way they work it's possible the actor playing the guilty character may not know at this moment."

Larry proved he has a sense of humour by turning up to the filming of Archie's funeral - but he said his face won't be visible on screen.

"It was just a laugh, really. I spoke to the director and she said it was a good idea," he added