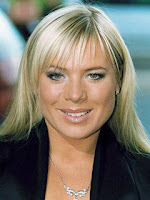 It's nearly four years since she's been in the Square, but Letitita Dean admits that in fans' minds she's pretty much welded to the role of Sharon Watts.

The actress was one of EastEnders' original cast members in 1985, and has starred in such high-profile plots as the "Sharongate" love triangle with brothers Phil and Grant Mitchell.

She told the Croydon Advertiser: "I'm pretty much still recognised as Sharon wherever I go. I was in people's living rooms almost every night of the week so they still know me as Sharon."

Letitia has headed back to the bright lights of Walford on a number of occasions since she first left in 1995. She reprised the role in 2001, and appeared on and off until January 2006.

And she's not ruling out another return, as the door has helpfully been left open.

"I'm in Texas at the moment, so I've not been killed off. I'd never say never to it."

Sharon fans can catch her as the Wicked Queen in Snow White and the Seven Dwarfs at Croydon's Fairfield Halls, where her brother Stephen Dean plays the Prince.