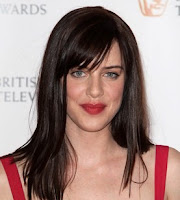 Michelle Ryan has admitted having a crush on fellow ex-EastEnder Sean Maguire.

Michelle, who shot to fame as Walford's Zoe Slater, said she carried a torch for Maguire, who was Aidan Brosnan in the BBC soap.

The pair did not appear together in Albert Square but now co-star in ITV1's Mr Eleven.

Asked if she ever fancied Sean or Adam Garcia, another Mr Eleven co-star, Michelle, 25, said: "I did! It was weird working with them both.

"It was definitely a teen thing because when I met them I thought, 'Oh I used to like them but now there's nothing.'

"Obviously it was great to work with them but if I'd have fancied them in real life I would have been in trouble and very distracted. I had so much fun with them.

"I was telling my friend I had love scenes with them and they were quite jealous."

While filming Mr Eleven, the pair did not compare notes about their time in Walford. "It was a great starting block, but we're lucky that we made the leap I think. He did say I've always got somewhere to stay when I go out to LA, so that's nice."

Mr Eleven, which is based on theory that the average woman will marry her 11th sexual partner, is a two-part comedy drama starting on ITV1 at 9pm on Friday December 11.