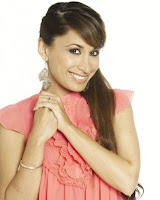 The actress, who plays Amira Shah in the BBC soap, even described Larry Lamb, who plays the villain, as "gorgeous".

The 29-year-old star is understandably upset that the 62-year-old - whose character Archie will be killed off on Christmas Day will be leaving Walford.

"I was really upset he was leaving because he's such a great part of the cast and I think Barbara Windsor and him make a good match," Preeya said.

"I did chat to him and he's really sad to leave, but he does have some really exciting projects coming up as well."