Amira and Syed's marriage over? 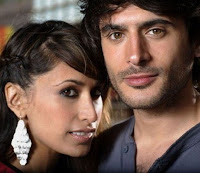 EastEnders Amira Masood's marriage to husband Syed is already over.

Amira , played by Preeya Kalidas, still has no idea her partner is gay and has cheated on her with Christian Clarke, and the newly-wed will give her husband a taste of his own medicine this week when she kisses new arrival in Walford, Danny Mitchell, behind his back.

The actress said: "Amira does love Syed and has always seen her future with him, but she feels neglected already.
"That's why she's enjoying flirting with Danny."
Amira is concerned as she and Syed didn't sleep together on their honeymoon, Amira attempts to spice things up by visiting him at work wearing sexy underwear but he tells her to put her coat on.
It's not only Amira who has concerns. Syed's homophobic mum, Zainab knows her son is homosexual because Syed's ex-lover, Christian, told her, but won't accept it, even suggesting a baby to resolve the newly-weds' issues.
Preeya added: "Her marriage to Syed is a sham - and there's no way a 'band-aid baby' will fix that. Nothing will."
Source - Virgin Media
Email Post
Labels: Amira Syed Masood