Archie's killer to stay in the dark 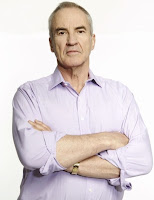 EastEnders bosses will keep the identity of Archie Mitchell's killer a secret from the relevant actor right up until the day of the big reveal.

Executive producer Diederick Santer said only six people will know who the murderer is until February 19, when the killer will be unmasked in a live episode of the soap.

He said the cast would rehearse a number of possible endings, and added: "The real reason we're doing [the live episode] is to keep it a secret - until that day only six people will know who the killer is - and that night, when we start transmitting the show, I'll speak to the actor or actress and tell them it's them."

Archie, played by Larry Lamb, was killed on Christmas Day in the Queen Vic.

Diederick promised that a number of characters will emerge as suspects in the run-up to the live episode, including Ian Beale, Phil Mitchell, Peggy Mitchell and Sam Mitchell.

He pointed out that it won't necessarily be someone who is known to be leaving the show, as the killer could only be revealed to the audience, rather than to the police and other characters.

The live episode marks the 25th anniversary of the Walford soap.