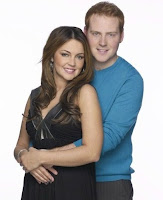 EastEnders actor Charlie Clements has said he is thrilled to see his character Bradley reunite with on-off love Stacey.

Charlie, who is set to leave the soap next month after four years, described the couple as "perfect" for each other.

Speaking on the red carpet at the National Television Awards, he said: "I think they belong together, those two."

He continued: "They are perfect - they're so opposite that they are perfect, but who knows if it's going to be a happy ending or not."

The details of Bradley's exit from Albert Square are a well guarded secret, and recent tabloid reports he commits suicide were denied by Eastenders officials.

"We haven't got the scripts in yet, it's shrouded in secrecy," he said. "I'm looking forward to getting the scripts and seeing what actually does happen, so don't believe what you read!"