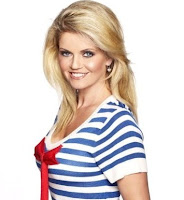 Viewers won't be the only ones plunged into mourning when Barbara Windsor leaves soapland - Danniella Westbrook has said Albert Square will be 'odd' without her.

The actress hasn't rule out a return to EastEnders, but confessed she doesn't like thinking of the Queen Vic without Peggy Mitchell behind the bar.

"I love Barb, we're really good mates and it would be really odd to be there without Barbara," Danniella said.

"But Steve (McFadden) is there and Rita (Simon) is there and Sam (Womack) is there, it just would be odd without Barbara. I haven't thought about it, I don't like to think about Barbara not being there."

But the 36-year-old stayed silent on the burning question of who killed Archie Mitchell.

"I do not know who killed Archie. I don't know who's in the line-up, I have no clue," she said.
Source - Holy Soap
Email Post
Labels: Peggy Sam Mitchell