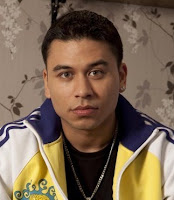 Ricky, who plays Fatboy in both the main soap and its online spin-off EastEnders: E20, said his family are lifetime fans of the acting veteran, who plays Patrick Trueman in the show.

Ricky said: "I was really excited about meeting Rudolph Walker - for a very long time my family and I have all been fans of his."

He went on: "My nan, who has now passed, when she first came over he was first person of colour she saw on her screen when he did Love Thy Neighbour ages ago. Watching Rudolph has always been big draw. And him being in EastEnders made so much sense for my family because he was always the one to watch."

The actor said his "biggest surprise" was working with Adam Woodyatt, who plays Ian Beale in the soap,

"That was the first time I got nervous in the online experience," he said. "I was like 'Oh my goodness, this one of the legends of the show. This is crazy.' And it was fantastic playing the scene. Ian and Fatboy are like the opposite ends of each other."

"He is one of the coolest guys. He loves to have a chat and joke. If he sees us in the green room he says 'let's rack them up and have a game of pool.' He is totally different. It shows you what a good actor he is too."