E20 Sam shaped up for calendar 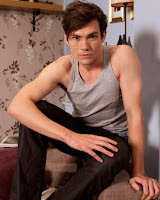 The Hollyoaks calendar usually gives the soaps' young studs a chance to flex their muscles.

But despite getting fit, Sam Attwater missed out on the chance to show off his toned physique when his stint on the series wasn't extended.

Luckily, his hot body hasn't gone to waste the actor now stars as boxer Leon Small in EastEnders E20, and has been given plenty of topless scenes.

"Originally I really wanted it to be extended - that's why I got into shape originally, I thought, if I'm going to be in, I want to be in the calendar," he said.

Asked if he felt under pressure to stay in good shape for his new role in EastEnders' online spin-off, he said: "Yeah. Only because there's quite a lot of topless scenes. Semi nudity. All from Leon.

"As soon as I heard that I was straight down the gym. Lots of crunches. Everyone said don't worry about it, but every time I did one of those scenes I had to watch it back and see how it looked because there will be 10 million people watching it. I want to be on the best form."