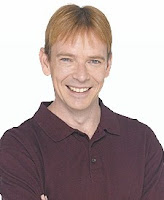 An EastEnders actor has hit out at the dogfood-like meals stars are forced to eat on set.

Albert Square veteran Adam Woodyatt, who plays café owner Ian Beale, was so enraged about the quality of grub he posted a pic on his Twitter page.

Adam, revealed BBC co-stars Barbara Windsor and Pam St Clement who play Peggy and Pat felt sick after seeing what they would have to eat.

The disgusting snap of lamb stew stunned fans on the social networking site, who flooded the page with comments.

Adam, who has more than 23,000 followers on the site, wrote yesterday: “For anyone who thinks ‘soap stars’ are pampered, this is the reason I brought my own lunch in...Babs and Pam reckon I’ve made it look much better than it actually was!”

He added: “I’ve probably opened a can of worms with that earlier tweet. If I have, I hope the caterers douse them for spaghetti!”