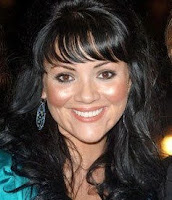 Former EastEnders legend Martine McCutcheon hasn't seen it for nearly two years because it has too many episodes and too many characters.

The actress didn't even bother to tune in to the BBC1 soap's Christmas Day cliffhanger.

The last time she watched was to see her old pal Patsy Palmer return as Bianca Jackson in 2008.
Martine told the News of the World: "Other than that I've not really seen it. I'd say the minute you do a certain amount of episodes a week, and the minute you've got loads of characters, it's hard to care about every single one for every single episode.

"When I was in it there were two episodes a week, with a Sunday omnibus.

"There were a lot fewer characters so people cared about you more, and went on your journey more.

"Now you feel there are some people in some soaps just because it fills up the time."

Her character Tiffany Mitchell wife of Grant was killed on New Year's Eve 1998, in an episode that pulled in 22 MILLION viewers.

Martine, who went on to star in Love Actually and recently published her first novel The Mistress, hinted she thought the soap was suffering from being too miserable.

She said: "When I was in it and all those people were watching, it was an amazing time. There were parts that were a bit dark but also quite comical, depressingly funny. With the credit crunch and everything else going on, people want a bit of escapism and a bit of fantasy.

"Maybe that's why my book is doing well. It's glamorous, and hedonistic, and I think you should be able to enjoy those things because life's tough. It's nice to indulge in those things while you can."
Source - News of the world
Email Post
Labels: Tiffany