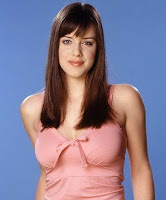 Michelle Ryan claims she never really fitted into the 'EastEnders' cast because she was so tall.

The actress, who played Zoe Slater in the BBC soap from 2000 to 2005, said she headed to the US after exiting the soap as she thought her figure was better suited to American TV.

She said: "Sometimes I think I never really fitted in at 'EastEnders', being much taller than everyone else and having this angular, athletic figure."

Michelle, also added she found the attention she received on the soap, which gave her a big break at the age of 15 - stifling, and often felt like she was living two separate lives.

She added to The Scotsman newspaper: "It was great experience but hard work and really intense. What really used to annoy me was the identity thing, when mine would get lost in Zoe's. I'd be like, 'Hang on, I'm acting - that's not me.' When you're a teenager and you're still trying to work out who you are, that can be tough.

"They tell you when you go in that your life will change but I wasn't ready for that amount of scrutiny."