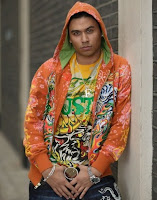 As the EastEnders: E20 character Fatboy, Ricky peppers his speech with slang.

Asked if fans might have trouble grasping the words, he said: "Of course - but the first time EastEnders came on 25 years ago and the first Cockney came on screen, I'm sure people had a bit of difficulty grasping that."

He added: "It's just an insight into what's going on in the streets. Parents, aunties and uncles might actually find out what the kids are talking about now."

Ricky explained that he was allowed to change his lines if they didn't seem authentic, and made sure other characters explained the less familiar terms he used.

"If it's something people wouldn't grasp, like 'prang' - in the East End 'prang' means 'scared' - when I said those lines I made sure Leon (Sam Attwater) would explain it. I'd say 'Bruv, you're prang'. He'd say: 'Bruv, I ain't scared.'"

He added: "If you keep your ears open and don't block it off you'll get to learn a bit of a new language."

Co-star Sam, meanwhile, said he had to change some of his character's lines because they may made him sound "ridiculous".

"They wrote in quite a few 'safe' and 'blad' and bruv' for me, but I didn't think my character would do that. And me saying it sounded ridiculous so we cut that out. He's more East End than I am - I'm from Surrey."