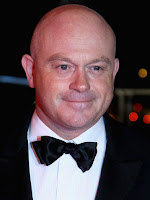 The ex-EastEnders star, who has specialised in making documentaries about the military and gang culture since leaving the soap, will tap into his knowledge in the area when he makes his fiction debut.

Devil To Pay, to be published in July, is set in Afghanistan and London and revolves around former soldier Nick Kane.

It will be the first in a series of books featuring Kane.

His novel is the first step in a new publishing deal with Random House companies Century and Arrow, which was announced on Friday.

Ben Dunn, publishing director of Century, said: "I am delighted that Ross is joining the Century list, I'm a huge fan of his bestselling books and thrilling documentary work for Sky.

"He has an incredible passion and insider knowledge of the military, and his foray into fiction promises to be very exciting indeed."

Ross, 45, said: "Ben has shown great understanding of who I am and where I'm coming from and he's shown a lot of faith in commissioning both my fiction and non-fiction. I'm thrilled to be moving and I'm looking forward to a long and fruitful career with Century and Arrow."