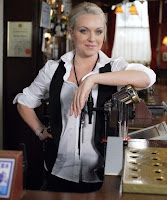 Rita Simons felt guilty when her 'EastEnders' character was given the Queen Vic pub.

The 32-year-old actress - who plays single mother-turned-landlady - was shocked to learn her character would be given the legendary public house after her on-screen father Archie Mitchell was murdered and left her it in his will.

She said: "I actually felt a bit guilty for Auntie Peggy. It's been Barbara Windsor's all this time and along I come to steal it from her! I initially felt very uncomfortable with it but the storyline's worked itself out by itself. It was very, very weird at first but I've almost got used to it now. When I think about it, though, it's still unbelievable that it's mine!"

Although she has come round to the idea, Rita is concerned her character will make a mockery of he new job. Roxy will make some disastrous decisions with over the next few weeks regarding the running of the boozer because she loses "her marbles" after gaining her new pub landlady status.

She added to website Digital Spy: "She has the brain of a gnat, doesn't she? She'll make a complete pig's ear of it. She's thick as two planks and as usual, she'll expect everyone to pick up the pieces for her.

"She sacks Tracey! Jane and I get on so well in real life and we tried our best to make it non-hostile, but the way it's written it just is, so we had to forgive Roxy and realise that she's lost her marbles. That's the only way I could get around those scenes - it's a ridiculous thing that Roxy does. The power just goes to her head."