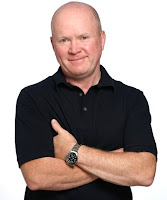 Steve McFadden has threatened to quit 'EastEnders'.
The 50-year-old actor - who plays hardman Phil Mitchell in the BBC soap is undecided as to whether to follow on-screen mother Barbara Windsor and leave the show when his contract expires in August.
When asked if he would seriously consider quitting Albert Square, Steve said: "Yeah, I really would. I'm not leaving yet. My contract's up in August. Then we'll see. Barbara leaving will be a massive hole for the show and for me personally as well."
72-year-old Barbara, Phil's mum and former Queen Vic landlord Peggy Mitchell for the past 16 years - is set to leave the BBC soap in the next two months.
Steve who has been in EastEnders for 20 years said he was "absolutely gutted" that the veteran actress was leaving.
He added to The Sun newspaper: "I'm sure they will leave the door open for her, they'd be mad not to."
At the National Television Awards on Wednesday night (20.01.10) Barbara said she'd decided to leave the show because she wanted to spend more time with her 46-year-old husband Scott Mitchell.
She said: "It'll still be a couple of months before I go. Then I want to spend more time with my husband. He's not getting any younger, you know!"
Source - Virgin Media
Email Post
Labels: Phil Mitchell