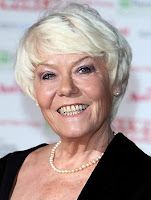 A January sale with a difference is hitting a London department store this month.

June Brown and Natalie Cassidy are among the TV stars taking to the shop floor to create a real-life version of sitcom Are You Being Served? in memory of late telly fave Wendy Richard.

EastEnders legend Wendy, who died last February from cancer at the age of 65, was a huge hit as Miss Brahms in the BBC One classic which first aired in the 1970s.

Now Nicholas Smith, who played Mr Rumbold in the show, together with June and Natalie, will help out at a charity sale at London store Selfridges.

They will sell designer outfits and accessories owned by the late actress, who was also loved by millions as Walford's Pauline Fowler.

You Are Being Served Again will see the department store on Oxford Street go back in time on Tuesday January 19 to recreate the old-fashioned atmosphere of the hit show. Outfits collected by Wendy from designers including Chanel, YSL and Gucci will be sold off.

Money raised from the sale will be donated to The Lady Taverners charity, which helps young people with special needs take part in sport.

Wendy's husband John Burns said: "It will be great to see Wendy's belongings at Selfridges in support of such a cause.

"I decided this would be a great way for Wendy to help The Lady Taverners. Wendy considered Selfridges her corner shop and would have been thrilled with the Are You Being Served? theme."