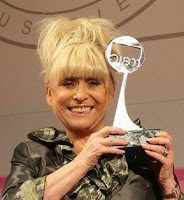 Barbara Windsor was all smiles today as she took home a lifetime achievement award.

The EastEnders legend, who is bowing out of her role as Peggy Mitchell this year, bagged the gong at the Television and Radio Industries Club (Tric) awards in London.

A beaming Babs said of her long showbiz career: "In a year or so it will be 60 years. I love it now as much as I did then.

"I know that I'm known for two great British institutions, EastEnders and Carry On.

"This year is going to be different for me because I'm leaving EastEnders."

But she added: "I'm not retiring. It will be interesting to see what happens."

Her success was echoed by that of her show, which beat Hollyoaks and Coronation Street to TV soap of the year at the ceremony at the Grosvenor House hotel.