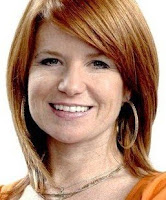 She may have quite a temper on her, but newlywed Bianca Butcher is fiercely protective of her brood, so much so that she's been voted the top TV mum.

In a Yahoo! poll of 42,000 people carried out in the run-up to Mother's Day, mum-of-four Bianca scooped 26 per cent of the vote to come out on top.

She is closely followed by sofa-loving Barbara Royle of The Royle Family, who scored 24 per cent of the vote.

And in third place is none other than Neighbours mother hen Susan Kinski, who nabbed 12 per cent.

Languishing at the bottom of the list is Coronation Street's Gail McIntyre. Only two per cent of people voted for the misfortune-prone widow, perhaps because of her annoying habit of picking disastrous father figures for her kids.

Paul Johnston, TV Editor at Yahoo!, said: "We are overwhelmed by the number of people who have voted for Bianca as their favourite TV mum. As loud and garish as Bianca can be, she also has a huge heart when it comes to her children and would do anything to protect them. You certainly wouldn't want her turning up on your doorstep if yours kids had been fighting with hers!"