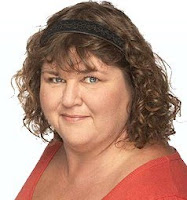 EastEnders star Cheryl Fergison will be among the acts taking part in Let's Dance For Sport Relief this Saturday.