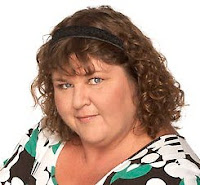 The actress, who plays Heather Trott in her day job, donned a blond wig and white tracksuit to perform Ice Ice Baby for Let's Dance For Sport Relief.

Heather, who will repeat her performance in Saturday night's final, said: "I think my son was very confused - He's 10, he was like, 'oh, what's going on?'"

She added: "A lot of people thought I had cut my hair but it was just the wonder of showbiz and make-up."

She joked that her EastEnders co-stars have been "very cruel but kind at the same time" about her performance.

Asked why she was the Walford star who was picked to take part, she said: "I think it was who had some time off, and I had the week off and they thought, 'she's lazy, this one needs her glutes seeing to, let's see if she can dance.' I think there were a few people who would have loved to have done it but because of filming they couldn't."