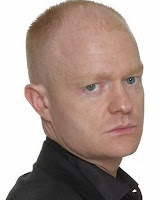 Jake Wood thinks his EastEnders alter-ego Max Branning is "weak."
The actor who has played the soap love rat for four years believes his character has such a problematic personal life because he is "easily led."
He said: "I think Max is ultimately a weak man but if you asked him, underneath it's all what he really wanted... I think he'd want Tanya and the kids back, he'd want his family around him. He always makes mistakes, he's easily led and the grass is always greener. He's his own worst enemy."
However, the 37-year-old actor who has daughter Amber and son Buster with his wife Alison Wood - believes Max gets away with so much because of his "bad boy" ways.
The soap womaniser cheated on his wife Tanya Branning with his daughter-in-law Stacey Branning, and also plunged into financial ruin.
He explained to the Daily Mirror newspaper: "Women like a rogue, they like that bad boy thing. Jo's talked in the past about that, from Tanya's point of view, why she's stayed with him so long and I think she has the sense that Tanya thinks she can change him - that's part of the challenge. Life with Max would never be dull.
"Even if Max did settle down, who is to say that five or 10 years down the line he wouldn't stray again? I think he's damaged enough."
Source - Virgin Media
Email Post
Labels: Max