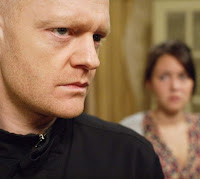 But how far will he go to get payback?

The episode will see Max catch up with his former lover Stacey Branning and threaten to hand her over to police to clear Bradley's name. The confrontation will explore Stacey's motives for killing Archie Mitchell, but whether she'll get away with murder remains to be seen.

"Max is obviously very upset," said Jake in a recent interview with the Daily Mirror. "In some ways he holds Stacey responsible for Bradley's death, I think he wants payback.

"People are desperate to see Stacey since she's gone away and they want some answers, in the same way Max does. Hopefully we'll find out."

The actor was also chuffed to be given the accolade of appearing in one of the soap's famous two person episodes, an honour only given to a few characters. "It's a real peak, for me and Lacey," said Jake. "It's a big compliment to be given a two-hander, an honour, especially as I've only been here four years."

Meanwhile, Lacey Turner has revealed that she doesn't think her character will ever get over losing Bradley.

"Bradley was the love of Stacey's life so I don't think she'll ever be the same without Bradley," the actress told the soap's official site. "But I hope that she copes and deals with it as best as she can. I'm sure she will because she's quite a strong character.

"I think every time she looks at the baby it's going to bring back memories of her and Bradley so she may struggle in that sense. But she's got good family around her and she's a strong-minded, tough person who's had to deal with a lot. I think it will be hard but she'll get through it hopefully."