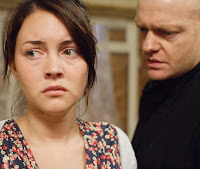 Jake Wood believes his two-hander episode with Lacey Turner was like "theatre".

The two stars recently recorded the special episode where Jake's alter-ego Max Branning and screen daughter-in-law Stacey Branning discuss the revelation she murdered Archie Mitchell and the scenes were so long, it felt like he was performing in a play.
Jake said: "It was very different to film. We had three rehearsal days and normally in any one filming day, you're shooting scenes from about eight different episodes. The scenes are usually anything from about a page to four or five. There's a 26-page scene which, when they timed it, was a 19-minute take - that was the studio day. It was almost like doing theatre.
"We did two takes, running through the entire thing twice and that was it."
While Jake has known there would be a special episode starring just a few cast members for a while, the 37-year-old star only found out it would be between Max and his former lover Stacey on the night of the live episode last month. During this episode Stacey revealed to Max she had murdered Archie moments after her husband Bradley fell from a rooftop and died.
He explained to DigitalSpy: "We always knew that there'd be a special episode, but we were led to believe that it was a two-hander plus 'the killer', so a three-hander. If they'd have told us that it was just Max and Stacey, we'd have probably worked out that one of us was Archie's killer! On the night of the live, Diederick told me that Stacey was the killer and went on to reveal that the elusive three-hander was actually a two-hander with me and Lacey."
Source - Virgin Media
Email Post
Labels: Max Stacey