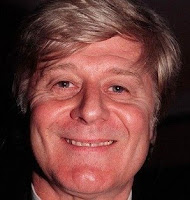 Peggy Mitchell and Pat Evans have been getting rather friendly of late, so it's about time these old rivals had something to fight over.

And that something is set to arrive in the form of charming freelance journalist Harvey Freeman, played by veteran actor Martin Jarvis.

BBC bosses revealed today that Harvey lands a job writing about the local elections for the Walford Gazette.

He'll soon have his hands full with both Peggy and Pat running for councillor.

Neither matriarch has had much luck on the love front lately, Peggy's dalliance with Archie Mitchell was, let's face it, an unmitigated disaster so both women fancy their chances at scoring with ladies' man Harvey, who hits screens in May.

An EastEnders insider teased: "On the outside, he appears a perfect gent and match for both Peggy and Pat, but in reality they may realise that what he has to offer is a pale comparison to the value of their friendship."

Martin's varied career includes roles in Taking the Flak, Inspector Lynley, A Touch of Frost, Doctor Who, The Bill, and Micawber. His film credits include Titanic.

Speaking of joining EastEnders, he said: "I'm absolutely thrilled to be a potential thorn between two roses, working with two actresses I greatly admire and have had the pleasure of working with before."

Executive producer Diederick Santer added: "I'm delighted that the wonderful and charming Martin Jarvis will be joining us in Walford, and I can't wait to see his scenes with Barbara and Pam."