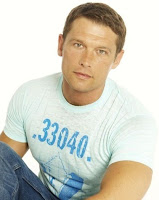 John Partridge wants his 'EastEnders' character to have a threesome.
The actor who portrays openly-gay Christian Clarke in the BBC One show claims the soap needs to push the boundaries and should allow his character, who is currently embroiled in a secret relationship with his married Muslim friend Syed Masood, to sleep with two men at once.
The openly-gay actor said: "Part of me would like to see Christian and Syed have the first civil partnership in the soap. But there is also another part of me that would like to see them have to deal with being a heterosexual couple, the infidelity, the threesomes, the side of gay culture that's not necessarily viewed at 7.30pm."
The 38-year-old star who is also working on the judging panel of the new BBC show 'Over the Rainbow' claims the 'EastEnders' early-evening time slot shouldn't hinder the salacious storylines.
He added to Attitude magazine: "I think we have pushed boundaries so much that it would be a cop-out to wrap it all up in a civil partnership and adopt an Afghan baby."
Vivienne Pattison, director of TV watchdog Mediawatch, doesn't agree with the outspoken star's views. She said: "This type of storyline would be wholly inappropriate for a pre-watershed show. Thank goodness Mr. Partridge isn't a script writer."
An 'EastEnders' spokesman added: "The views expressed by John Partridge are very much his own... at this stage we have no such storylines as the ones he suggests planned."
Source - Virgin Media
Email Post
Labels: Christian