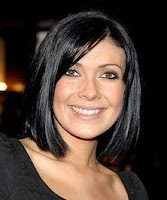 EastEnders pulled in more than 16 million viewers for its big 25th anniversary live episode and one of them was Corrie's Kym Marsh.

The actress, who plays barmaid Michelle Connor, wrote in her New! magazine column: "I really enjoyed the live episode of EastEnders.

"As an actress I know how difficult live TV is. Credit where it's due, they did a fantastic job - particularly as it involved the stunt where Bradley Branning fell from the roof."

But she poured cold water on rumours that her own show will go down the same route for its 50th anniversary.

"As far as I know, there are no plans for Corrie to do a live episode for our 50th anniversary in December, as rumoured in the press.

"The last one was 10 years ago, long before I joined the cast, but I'd definitely be up for it!"