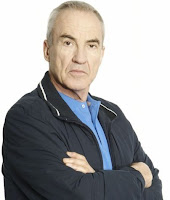 Larry Lamb would have stayed on at 'EastEnders' if he had been asked.

The 62-year-old star filmed his final scenes as villain Archie Mitchell in December, when his character was killed by a mystery assailant - later revealed to be Stacey Branning but he admits he was always keen to carry on the character.

Larry told The Guardian newspaper: "I had settled in to 'EastEnders', because it becomes your job. I think if they'd asked me, I'd have stayed on, but I don't think that would have been a wise decision."

Now his work on the soap and BBC comedy 'Gavin and Stacey' - which finished filming last year - has ended, Larry is looking forward to returning to the theatre.

Discussing leaving 'EastEnders' for his upcoming role in 'Educating Rita', he said: "When you're off that rollercoaster, you're in your own world again. It's an amazing show to be involved with, but now it feels natural for me to go back to what led me there."

Larry has also praised the soap for helping him discover a whole new level of fame.

He said: "'EastEnders' gives you a huge, weird amount of fame, but then you leave and the spotlight dims. I'm just an actor who was in a couple of popular programmes.

"But if it bumps you up the ladder a bit, and you become more commercially interesting to producers, then thank you very much."