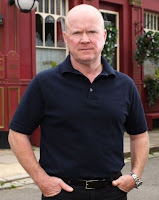 Phil Mitchell is the father of a secret child who arrives on EastEnders.

The schoolgirl who arrives on Albert Square alone and is found by Ronnie Mitchell turns out to be Phil's long-lost daughter Louise with his ex-girlfriend Lisa Shaw.

Steve McFadden, who plays the screen hardman, said: "Phil's had his two children stolen from him and that must really hurt. Now he's got back kids back he's got a chance to prove himself."

However, not all goes to plan when Phil discovers his cousin Ronnie has been hiding her from him.

A source said: "Phil violently pins Ronnie against the wall. But then he turns to see his daughter Louise and instantly regrets it."

Confusion later reins when Phil discovers Ronnie has involved social services, but Phil is desperate to keep her with him after being a bad father in the past.

The source added: "Phil wants to recreate the family he came from, only he needs to get it right because his father was violent.

"When Louise was a baby he was a bit ill at ease with he. He couldn't do the baby bit but he's always wanted to do the older stuff."

Phil is hit by a further bump in the road, when he is told he has not been named Louise's father on her birth certificate.

The source added: "Phil's warned it could be a battle to prove he's her real dad and get custody.

But then social services call to say they're going to inspect The Vic because Louise says she wants to live with Phil."

It has not yet been confirmed if Louise's mother Lisa will be making a reappearance in the soap.

As well as being screen lovers, Steve and Lucy also dated in real life.

Anonymous said…
Lucy Benjamin was one of the most talented actresses to grace The Square. (The second part of Phil and Lisa's confrontation in Portugal may have one of the top five Eastenders episodes ever.) Lucy's return to the show as Lisa would be enormously welcomed.
Thursday, 25 March, 2010