Wadia: Zainab is able to change 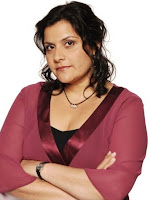 EastEnders Nina Wadia wants her homophobic alter ego Zainab Masood to accept her son's sexuality and believes she has the capability.

Zainab insisted her son Syed tie the knot with fiancee Amira Shah, despite having found out about his gay love affair.

Nina said: "I think this woman needs to learn. She needs to adapt, change, develop and go on a journey and I hope they do that because she has that capability."

She went on: "One of the first things we knew about her was that she was married to a Pakistani but left her first marriage to be with her true love. That says a lot about her. Hopefully she'll see that's what she needs to do with her son."

Anonymous said…
Does anyone know where the dress that Chelsea Fox was wearing for the funeral came from?
Monday, 08 March, 2010