Windsor to star in Bristol panto 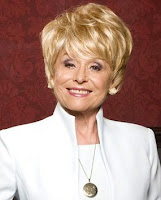 Barbara Windsor is to follow EastEnders with a role in a pantomime of Dick Whittington.

The star, who is leaving her role as Walford's Peggy Mitchell, will appear as Fairy Bowbells in the Bristol show.

Babs said she was "thrilled" to get the part, adding: "I have made no secret of the fact that I have been bursting to perform in pantomime again and the Bristol Hippodrome is a theatre I have always longed to play."

She went on: "This show will take me into my 60th year in showbusiness and I can't think of a better way to celebrate it."

It is 15 years since the veteran actress last appeared in a panto.

Eric Potts, best known for his role as Diggory Compton in Coronation Street, will play Sarah the Cook in the show.

Kevin Wood, chief executive of producers First Family Entertainment, said: "Barbara is one of the greatest stars in Britain and is truly loved by the general public.

"I have had the pleasure of working with her on many of her past pantomimes and not only is she a dream to work with, her performance is one not to be missed."

The production runs from Saturday, December 11 until Sunday, January 9.