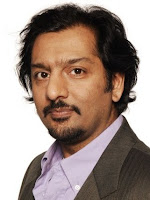 EastEnders star Nitin Ganatra has admitted he enjoys exploring his character's darker side.

This week, Masood Ahmed finally discovered his son Syed Masood's gay love affair with Christian Clarke, and instead of telling his son outright about what he witnessed, viewers saw the normally affable Masood taking a more calculating approach to make Syed nervous about what his dad might know.

Speaking on GMTV, Nitin said: "It's lovely to play. It makes a change to get darker with that character."

He went on: "Zainab and Masood balance each other quite nicely. When we walk on set the sound guys put on the theme tune to Terry and June."

Nitin said that it's been "very tiring" to play someone who has been oblivious to the truth, but said there is more to come in the storyline even after all the key players discover the reality.

"What you will see is [on Friday's show] is not the end of it. This has been so beautifully crafted. It builds more and more. Once it's out, there's yet more drama to happen which is soap drama at its best."