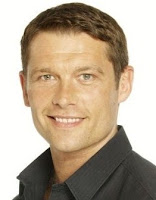 John Partridge used to run a fitness class for his 'EastEnders' co-stars.

The actor who portrays openly-gay Christian Clarke in the BBC One soap is such a "gym junkie" his colleagues made him plan lunchtime keep-fit sessions for them, but he was forced to give these up when they became too popular.

He said: "I could be labelled a gym junkie but there are worse things to be addicted to than dumbbells.

"I used to do Johnny's 30-Minute Burn... loads of people, Patsy Palmer, Rita Simons, crew and runners... everyone. But it's difficult because people's schedules change at the last minute. So I thought, 'screw this, I'm not going to lose my lunch hour and my own work out'. So I stopped."

Because of his love for the gym, the 39-year-old star believes he has the best body out of all the 'EastEnders' stars.
He said: "Half of them think I'm mad and the other half would love to do it. They think it's more difficult than it is. I go to the gym five times a week and I run marathons. I find I need that hour in the day where I don't think about work or anything other than training. People assume I'm in the gym three hours a day but I do 45 minutes..."
The actor thinks his body can only be beaten by that of his boyfriend of seven years, Jon Tsouras, who he plans on marrying "later this year".
Discussing who is the fittest in their relationship, he added: "People always think it's me but it's my fella... he is the one and I know that. Trust me, I've kissed enough frogs to know."
Source - Virgin Media
Email Post
Labels: Christian