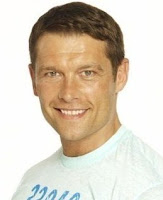 John Partridge hasn't received any negative criticism since starring as openly-gay Christian Clarke in 'EastEnders'.
The 38-year-old actor who is currently judging on Lord Andrew Lloyd Webber's latest musical theatre star search show, 'Over The Rainbow' admits he was concerned about how he would be perceived on the BBC One soap, but has so far had nothing but positive comments.
He told Now magazine: "I've been very lucky because I was concerned about how a gay character would be perceived.
"I used to be able to walk down the street without my sexuality on show because no one knew me.
"I'd just go about my day-to-day life. But now people know I'm an open and proud gay man. People have been great. I've had nothing negative so far, touch wood!"
However, he claims kissing scenes with closeted Muslim character Syed Masood are still difficult.
He said: "You have about 30 people around while you do them, so it's the most un-sexual environment.
"It's nerve racking. Marc and I've become really good mates through this process. Actually, we've only had about two kissing scenes."
Source - Virgin Media
Email Post
Labels: Christian Syed Masood