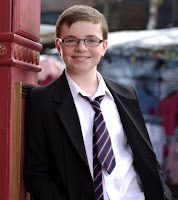 Ben Mitchell is set to leave EastEnders this summer.

Charlie Jones who has played the partially-deaf schoolboy for the past four years apparently had to be "consoled" after bosses on the BBC One show told him his alter-ego would be written out during one of the summer's biggest storylines, expected to be based around his hatred of his younger sister Louise.

It was also revealed that Madeline Duggan, who plays teenager Lauren Branning, will soon be leaving Albert Square too.

A BBC spokesman said: "Charlie and Madeline have been a pleasure to work with and we wish them all the best for the future."

The news comes amidst a dramatic shake-up of the soap, involving several characters bring axed - including Chelsea Fox, Minty and Charlie Slater.

Other upcoming twists on the show include a new love interest for Darren Miller who will be seduced by blonde bombshell Jodie Gold, played by Kylie Babbington.

New producer Bryan Kirkwood is set to introduce several new residents to the square in the coming months, including 'Footballers Wives' star Zoe Lucker who will portray Max Branning's new love interest. He is also bringing back old favourites Kat and Alfie Moon.

Anonymous said…
I love Ben, he's a great little actor! They should have kept him in - you could of had some fun with his tory lines as he grows up. What a loss. They always get rod of the best ones.
Wednesday, 26 May, 2010

Anonymous said…
charlie was superb in the stella storyline it is the scriptwriters fault who have given him appalling and disturbing lines to act out lately. Sack them instead!
Monday, 07 June, 2010

Anonymous said…
I can't believe that they have introduced a different actor, who quite frankly does not portray Ben as well as Charlie did. He was an endearing character despite his misdemeanors.

I just don't see this new Ben in the same way.

I hope the idiots who recast him will think again & bring him back. Everyone I know feel the same!!!
Sunday, 09 January, 2011

Anonymous said…
The new Ben is scary and does not fit the part at all!
Wednesday, 16 March, 2011

Anonymous said…
I've tried to get use to the new Ben, but I have to say the old Ben actor had more personality and quirks. it would of been good seeing his personality quirks and all develop over time.
Maybe the writers will eventually liven this Ben up and bring some of his personality back !
Wednesday, 11 May, 2011

Anonymous said…
I have tried to get used to the new Ben but it's just not working...Charlie was super in the part & it would have been great to see how he developed Ben post jail. Yes, jail would have changed him but the gentle soul that is Ben would have still been (somewhere) there with Charlie playing him. Now all I see is an actor trying to play a part that just does not suit him! Could you ever imagine this one loving musicals & donning tap shoes?!
It will be very easy to turn this Ben into another Mitchell thug. It would have been much more interesting to see how Ben fights against turning into this after his jail time.
This is not Joshua's fault. The fault lies at the feet of the new producer with the new broom sweeping clean attitude. Charlie, you have the last laugh!!
Tuesday, 14 June, 2011