Preeya: Music was always my passion 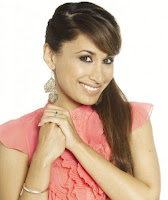 Preeya Kalidas, who left EastEnders to pursue a pop career, insists music has always been her passion.

The actress, who played Walford's Amira Masood and releases her first single Shimmy in July, said the move is not an attempt to capitalise on her soap fame.

She said: "Music is not something that I've just plucked out of the air or that I'm turning to to capitalise on my exposure in a soap opera. For me it's always been my passion, something I've always wanted to do'."

Preeya described her first single, which features Mumzy Stranger, as "total escapism, a real brew of sexiness and ethnicity".

The star said she has always been "captivated" by glamorous women.

"One of my earliest memories was watching Madonna on Top Of The Pops, just entranced. They all fell into place after that. For me I've always admired iconic, strong, talented women."

Her single is released on July 26.