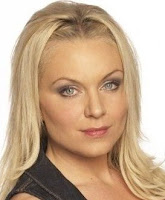 Roxy Mitchell will be left penniless by her evil brother Danny.
The EastEnders millionaire who is played by actress Rita Simons will be devastated after she realises the £3 million left to her by her father Archie Mitchell has disappeared at the hands of her newfound sibling, portrayed by Liam Bergin.
Rita revealed: "Roxy has no idea what Danny has been up to. She won't believe it when she learns the truth. Roxy doesn't have the best business brain but when she sees how much is missing, she'll be appalled."
Mother-of-one Roxy who inherited her wicked father's fortune after he was murdered by Stacey Slater, discovers her financial woes after offering to help her sister Ronnie with her boyfriend Jack Branning's private hospital bills.
After club owner Ronnie agrees to allow her sibling to help, Danny who only entered Albert Square in January when it was revealed the girls' parents had raised a secret son - approaches her with a copy of Roxy's bank account, which shows she has just £200 of her fortune left.
Source - Virgin Media
Email Post
Labels: Danny Mitchell Roxy

Anonymous said…
There needs to be a way to share these blog entries on Facebook and other social networking sites.
Friday, 21 May, 2010