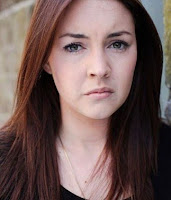 Stacey Branning's unborn baby has given her "reason to live".
Actress Lacey Turner who portrays the pregnant market stall worker on 'EastEnders' has revealed how her alter-ego has nothing to look forward to in life other than her baby bump after her husband Bradley died earlier this year.
Lacey said: "She'll put everything into being a mum. The baby's given her a reason to live now that Bradley's gone."
However, the bi-polar Albert Square resident is in for a fright when she feels a "twinge" in her tummy and worries she is losing the baby.
She told Soaplife magazine: "She feels a twinge when she's at the market stall. Jean panics and that scares Stacey who's terrified the baby is going to be born too soon - it's not due till late June.

"It turns out to be a false alarm. The thing is she hasn't been to any antenatal classes so she doesn't know what to expect from a pregnancy.
"Jean is supposed to be her birthing partner, and you can imagine how that would be, can't you! But it might not turn out like that."