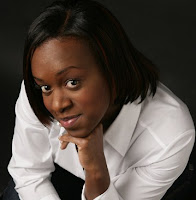 Actress and comedienne Tameka Empson will be returning to EastEnders, it has been confirmed.

The 3 Non Blondes star will be reprising her role as Denise Fox's sister Kim, who's set to 'cause mayhem' as she settles into life in Walford.

Fans of the BBC1 soap last saw Kim on screen in November 2009 when she and her alcoholic boyfriend Dexter attended the wedding of Denise and Lucas Johnston.

Party girl Kim's reappearance soon ruffles Lucas's feathers - but underneath her bubbly exterior she's clearly vulnerable - and when Dexter doesn't return with her it looks like Kim is running away from something.

Tameka said: "I'm really thrilled and excited to be returning to EastEnders. I've always loved the show and working with such fantastic actors makes the whole experience even sweeter.

"Kim Fox is such a great character to play and gives me scope to do things I usually wouldn’t get away with."

Y Dim ond un said…
So glad you're back 'Kim' !
I'm loving you in E.E.
You're a bright star in the drab World of Walford; don't let the Square get you down; fight, resist, and stay as focused as you are now!
Thursday, 12 August, 2010