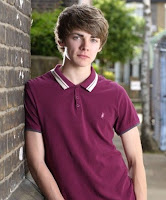 Thomas Law tells everyone his first 'EastEnders' kiss was with Phil Mitchell.
The actor who plays schoolboy Peter Beale in the BBC One soap admits he often lies and tells people that Steve McFadden, who portrays the hardman, received the "honour" of being his first televised passionate embrace.
He said: "If ever I get asked this question, I make a joke and say that my first on-screen kiss was with Phil Mitchell, because when we did the car crash and my character nearly drowned, he gave me the kiss of life, so I'm giving that honour to him."

The 17-year-old star also admitted Adam Woodyatt who plays his 'EastEnders' father Ian Beale made his actual on-screen kiss with Lauren Branning really uncomfortable for the pair of them.
He told Top of the Pops magazine: "I'm afraid Lauren got sloppy seconds! It was really awkward because Adam, who plays my dad, made me feel uncomfortable about it - but in a jokey way!
Everyone was staring at us and I could hear all the sniggers, but it was alright in the end!"
Source - Virgin Media
Email Post
Labels: Lauren Peter Beale Phil Mitchell