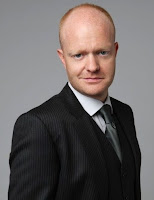 The actor, whose character Max Branning had an affair with Lacey's alter ego Stacey Branning, tips the award-winning actress for a glittering career.

He said: "I think the time's right for her as she's been here six years. She took a long time to come to that decision. I think she'll do incredibly well and she wants to do other stuff for a while and I think she'll be successful doing that."

He went on: "She's an amazing actress and she's got an incredible future ahead of her."

"We all started off at the same time so we're very close," he said.

"I'm very close with Maddie's family off-screen and I've seen her a few times since she finished. We all stay in touch and I think again she's a fabulous actress and I think she'll do incredibly well."