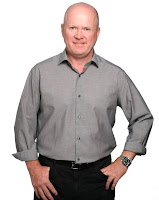 But the actor, who has played Peggy Mitchell's bruising son Phil since 1990, said he decided to stick with the show because Peggy's exit meant he could explore new ground with his character.

In an interview with the TV Times, McFadden confessed: "I thought it might be time to move on, with Barbara going, but then I realised it's a chance to do something different with Phil.

"The umbilical cord will be cut. We've had Phil and Grant, then Phil and Peggy, but now he'll be on his own."

He added: "I've stayed with the show because they've kept it interesting."

Windsor filmed her final scenes in the Walford serial on Friday after nearly 16 years as the feisty matriarch.

McFadden took a break from the soap between Christmas 2003 and April 2005, in which he just wanted to "travel and eat curry and ice-cream". After putting on weight during his time away, he has since got into shape with a strict daily regime of swimming one mile and cycling 10 miles.

The actor has lost more weight for an upcoming storyline, which sees alcoholic Phil descend into addiction to crack cocaine.

"I did it with a crash diet, which I wouldn't normally advocate. I felt it was important to lose weight, as I don't think food is very high on Phil's list of priorities," the 51-year-old told the magazine.

McFadden admitted that such a hard-hitting storyline "drains the life out of you", but added: "I can honestly say that this has been my most challenging and exciting year in EastEnders."