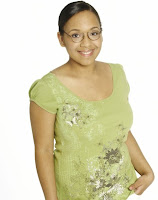 EastEnders actress Belinda Owusu would love to star in the musical Wicked.

The actress has finished filming the role of goody two-shoes Libby Fox after four years in the show, and now fancies a less wholesome part.

She told Inside Soap magazine: "I'd love to play Elphaba in Wicked, so that I could sing Defying Gravity - it gives me goosebumps."

However, she added: "I'd never be able to do it, though, because I can't sing that well!"

The actress, who had an emotional final day on set, took a souvenir home from Albert Square.

"I took Libby's glasses with me when I left - the really old ones she wore when I first started.

"People keep asking me where they are when I meet them while out and about - so maybe I'll pop them on again one of these days."

Winona said…
Never mind the glasses, I bet she'll be glad to shed that dreadful Libby wardrobe and hairstyle.
Belinda herself is a very pretty young woman.
Best of luck Belinda.
Friday, 06 August, 2010